1. The implementation of the Social and Economic Committee to replace the existing bodies

A single and mandatory body for all companies

After a number of successive reforms of the social dialogue, the French system, involving multiple staff representative bodies, (D.P, C.H.S.C.T, C.E) will have completely disappeared by the end of 2019. Although, until now, the law has stated that each body should act within specific boundaries, in practice, they have often tended to deal with the same subjects. In order to remedy this, a single staff body, called DUP, was introduced a few years ago in order to encourage companies to regroup. This law remained optional and limited to companies of a certain size.

The last step of the Macron Reform is the mandatory merger of all the current bodies into a single staff representative body called the Social and Economic Committee (CSE), which must be implemented before 1 January 2020 by all companies with 11 employees or more.

A response to the challenges faced by company heads

This modernization meets a longstanding demand from company heads, which:

However, the reform does not increase the obligations of small businesses. This implies that the CSE, as an entity, will not have legal standing in companies with fewer than 50 employees. In this case, its responsibilities will be reduced (mainly taking over the former duties of employee delegates).

In companies with 50 employees or more, the CSE will have broader duties since it will incorporate the responsibilities and missions devolved to the former CHSCT and CE. Elected employee representatives will therefore gain in competency and flexibility allowing them to deal with all matters (economy, strategic orientation, working conditions, health, etc.).

Time for social dialogue to establish a tailor-made Committee

Negotiations will be pivotal to adapt the new role of the CSE to the needs of companies. A high-level social dialogue and in-depth analysis of internal requirements will enable companies to establish a bespoke CSE.

2. Overview of the staff representative bodies before and after the reform: innovation and continuity 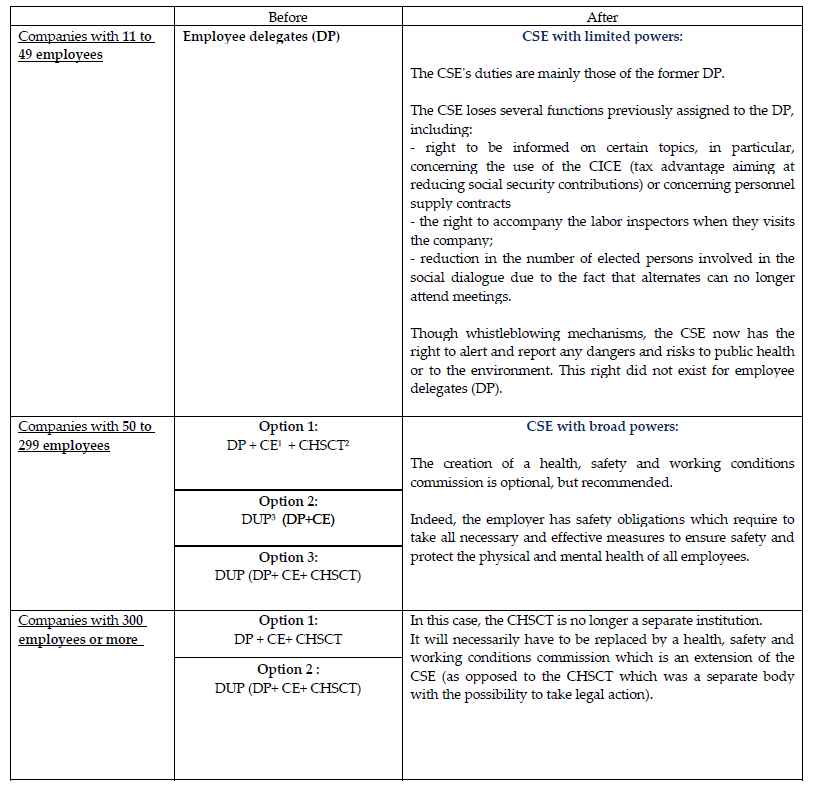 3. How to benefit from the new negotiation rules in my company?

The running of the body can be adapted in each company in order to strengthen the effectiveness of the social dialogue (A) with the aim of reducing labor law rigidities though the conclusion of derogating “win-win” company agreements meeting the company’s operational needs (B).

A. Introducing a tailor-made CSE

More favorable legal provisions in the absence of an agreement

These new legal provisions are less favorable to employee representative bodies: decrease in the number of employee representatives, number of successive mandates limited to 3, role of the alternate limited to replacing the titular, increasing request for the CSE’s operating budget due to the extension of the list of co-financed expert-assessments.

As a result, elected members will be much more willing to negotiate than in the past. The employer will therefore be allowed to think in terms of a “win-win” scenario in order to render the social dialogue and the running of the CSE within the company more flexible.

The implementation of “win-win” company agreements is the key to flexible French labour law standards and to improve the competitiveness of companies.

The principle: Primacy of the company agreement

The “Macron Reform” extends the scope of primacy of the company agreement over the branch-wide agreement, thus allowing companies to adapt some regulations to their specific operating requirements: 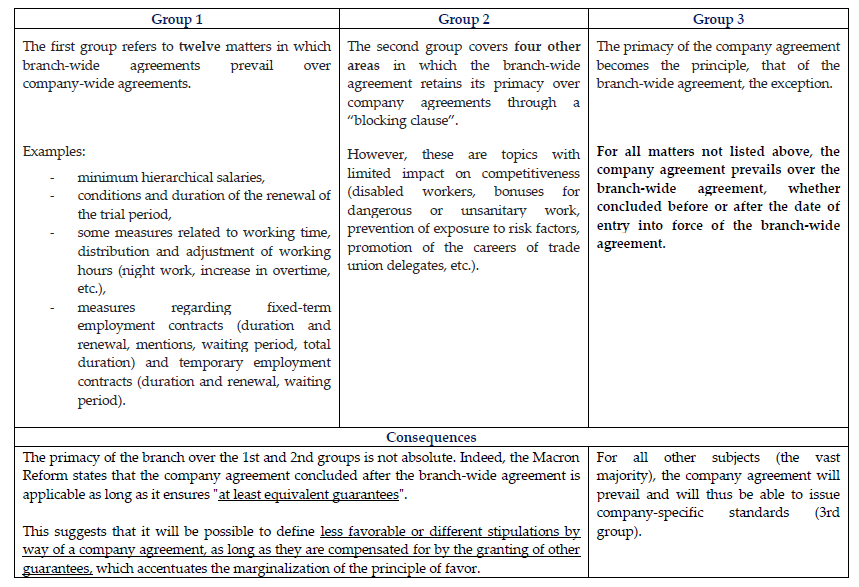 Facilitation of restructuring through the conclusion of collective agreements

Lastly, apart from these three groups, “restructuring” measures are greatly facilitated when they are not conditioned on the conclusion of a collective company agreement. Economic difficulties, once required to make necessary changes, are no longer mandatory. One of the key measures of the Macron Reform, known as collective mutual termination, allows employers to negotiate with unions on the number of redundancies and the related social and financial conditions of departure.

Easier, cheaper and legally safer, the scope for employers to negotiate is now considerably wider.

[4] Base de données économiques et sociales: a tool that makes it possible to gather the information required by recurring consultations of employee representative bodies.